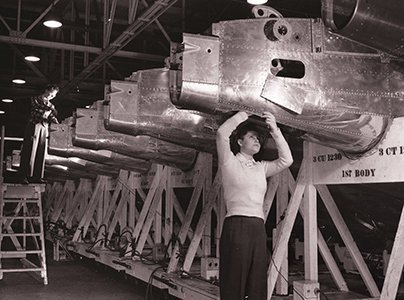 It all began on October 7, 1929, when aspiring aviation pioneer Glenn L. Martin opened a new aircraft manufacturing facility just outside of Baltimore in the small suburb of Middle River, Maryland. With proximity to Washington, D.C., and access to the Chesapeake Bay, railways and roads, this location provided everything his rapidly growing company required. By 1942, the Glenn L. Martin Company had grown to support additional production facility buildings, an airfield, passenger terminal and six hangars.

In addition to training many of the young aircraft engineers and enthusiasts who later would start aircraft empires of their own (among them James McDonnell, Donald Douglas, and William Boeing), Martin designed more than 85 aircraft during his career, some 11,000 of which were built under his leadership. Many featured never-before-used innovations, such as a retractable landing gear, de-icing wing pads, gun turrets, and rotating bomb bays. During peak production in World War II, Martin’s company employed more than 53,000 people at Middle River, working 24 hours a day to meet wartime demand.

MRAS has a proud heritage of aviation industry excellence spanning

Aircraft production at Middle River ended in 1961 as the Martin Company merged with American Marietta to form Martin Marietta, with a new focus on missiles and space projects such as Gemini, America’s second human spaceflight effort. When the space-related programs were shifted away from Middle River in the late 1970s, the company’s business strategy shifted to the research and development of new, cutting-edge composite technologies – a move that would later provide a successful strategy for the future.

In 1995, Martin Marietta and the Lockheed Company agreed to a “merger of equals" that produced one of the largest aerospace, defense and technology companies in the world. When the resulting Lockheed Martin Corporation sold some of its business units to General Electric two years later, the historic factory and operations at Middle River were included in this acquisition.

Middle River Aircraft Systems was born in 1998, specializing in jet engine nacelles and their thrust reversers, along with aerostructures for commercial and military applications. The MRAS worldwide customer base includes Airbus, Boeing, Lockheed Martin, General Electric and Pratt & Whitney,  as well as more than 150 commercial airlines and international military services. MRAS’ products are used on such commercial airliners as the Airbus A320neo, A330 and A330/A310; Boeing’s 747-8; the Embraer E190 and E195; COMAC’s C919 and ARJ21; along with Lockheed Martin’s P-3 maritime patrol aircraft. 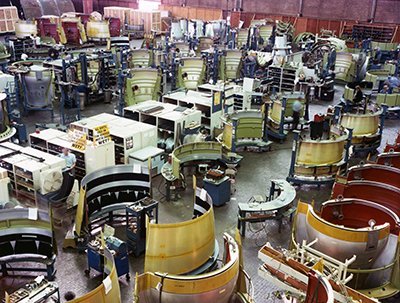 High-rate production of cascade-type thrust reversers for CF6 turbofan engines is shown at Middle River during the 1980s.

In 2009, the Nexcelle joint venture was formed between MRAS with France’s Safran Nacelles to focus on the production of nacelles for jet engine integrated propulsion systems. Nexcelle has secured contracts for the nacelle and thrust reverser on GE Aviation’s Passport powerplant that equips Bombardier’s Global 7500 business jet (with MRAS serving as the program leader); and for the LEAP-1C engine on COMAC’s C919 jetliner.

A new milestone began in 2019 when MRAS was acquired by ST Engineering, a global technology, defense and engineering group, and renamed Middle River Aerostructure Systems. As a part of ST Engineering’s global aerospace network and facilities, MRAS embarks on a new chapter of growth as it leverages the resources of its parent company to further build the business in nacelles and aerostructures – with an expertise in the use of composite materials.