The Nexcelle joint venture has marked a major program milestone with its delivery of the 200th production nacelle for Passport turbofan engines that power Bombardier’s Global 7500 business jet.

This achievement reflects the ability of Nexcelle’s two parent companies – Middle River Aerostructure Systems (MRAS – a subsidiary of ST Engineering) and Safran Nacelles (Safran) – to ramp up the nacelle output in meeting production rates for the twin-jet Global 7500, which entered service in late 2018 and has become a leader in the large cabin business jet category.

Nexcelle’s nacelles are an important contributor to the optimum performance of the Global 7500’s GE Aviation-produced Passport engines, and their thrust reversers’ effectiveness for landing deceleration and braking enables the Global 7500 to operate from shorter runways.

Bombardier delivered the 50th Global 7500 earlier this year as the Canadian company reaches a steady run-rate, while recently announcing completion of the 100th rear fuselage and wing to equip the twin-jet – which is assembled in Toronto. According to Bombardier, the Global 7500 is demonstrating an outstanding dispatch reliability rate of 99.7% and has proven to be the highest-performing aircraft in its category.

MRAS Program Manager Edwin Shirk said Nexcelle’s maturity with the nacelle is demonstrated by the smooth manufacturing process and its podding – during which the Passport engine is integrated with the nacelle at GE Aviation’s Peebles, Ohio facility.

Features of the engine nacelle include a one-piece extended aluminum inlet lip for reduced aerodynamic drag, as well as a 360-degree, single-piece extended composite inner barrel that incorporates advanced acoustic protection for lower engine noise levels. Composite materials also are used to produce a simplified fan cowl, with its large upper and lower fan cowl doors (103 inches in length) facilitating access to the Passport engine for inspection and maintenance. 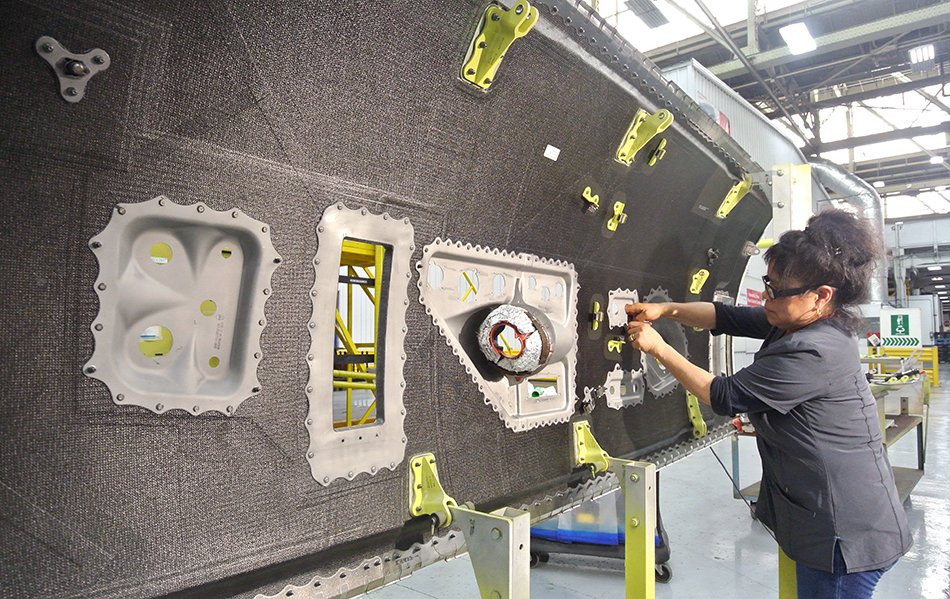 The 200th Passport nacelle’s apron adapter completes its integration on the production floor at Middle River Aerostructure Systems. This adapter includes attach points for the nacelle’s lower and upper fan cowl doors, and serves as an interface between the aircraft’s systems and the business jet’s side-fuselage-mounted engines.