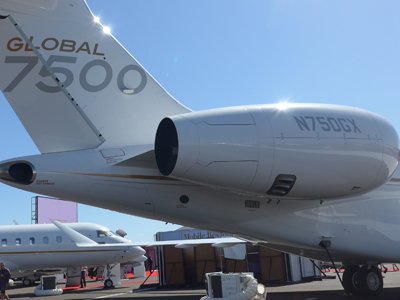 The Global 7500 was one of the largest business jets in the NBAA-BACE static display at Las Vegas’ Henderson Executive Airport.

Bombardier’s Global 7500 – equipped with the complete nacelle system supplied by the Nexcelle joint venture of Middle River Aerostructure Systems (MRAS) and Safran Nacelles – is demonstrating high in-service reliability, with a strong order book and a positive sales outlook for the future. Nearly 80 of these large-cabin business jets have been delivered to date.

This was the message of Éric Martel, Bombardier’s President and CEO, during the company’s press conference at the National Business Aviation Association’s 2021 convention and exhibition (NBAA-BACE) in Las Vegas, Nevada.

Speaking to reporters on October 11, Martel said the Global 7500 continues to demonstrate “extremely solid reliability” in service. “We are feeling very good about our Global 7500, which is the flagship of business aviation today, and will remain well positioned during the highly robust recovery in this market sector.”

Martel said the market upswing is underscored by the increasing flying hours logged by such Bombardier customers as the Malta-based VistaJet private jet operator – which received its first two Global 7500s in 2021, with up to 12 aircraft planned to join the fleet over the next two years.

Nexcelle’s nacelles are part of the first true integrated propulsion system (IPS) for business aviation, equipping the Global 7500’s Passport turbofan engines from GE Aviation. The IPS is an important contributor to the twin-engine aircraft’s overall performance, and the effectiveness of its thrust reversers for landing deceleration and braking enables the Global 7500 to operate from shorter runways.

Among the engine nacelle’s design features are a one-piece extended aluminum inlet lip for reduced aerodynamic drag, as well as a 360-degree, single-piece extended composite inner barrel that incorporates advanced acoustic protection for lower engine noise levels. Composite materials also are used to produce a simplified fan cowl, with its large upper and lower fan cowl doors (103 inches in length) facilitating access to the Passport engine for inspection and maintenance.

The thrust reverser uses a mature target-type design that benefits from lighter weight through the integration of components that typically are separate, such as the pivot frame and fan ramp. The use of composite and thermoplastic materials also contributes to the thrust reverser’s lower weight. During flight, the thrust reverser has very low internal drag when stowed in its direct-flow configuration.

Nacelles from the Nexcelle joint venture are highlighted in these photos of the Global 7500 on display during the NBAA-BACE exhibition at Henderson Executive Airport. The target-type thrust reverser is shown in its stowed position (photo at left), while the photo at right details the nacelles’ aft fuselage installation on Bombardier’s large-cabin business jet.