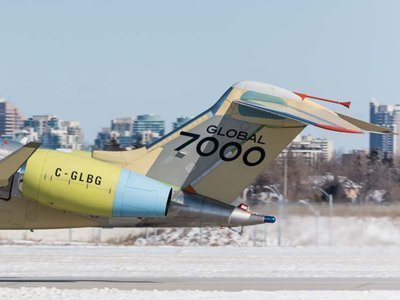 The fifth and final Bombardier Global 7000 flight test vehicle (FTV) has gone airborne, marking another step toward the twin-engine business jet’s certification and entry-in-service in 2018, equipped with nacelle systems from Nexcelle – the joint venture of Middle River Aircraft Systems and Safran Nacelles. 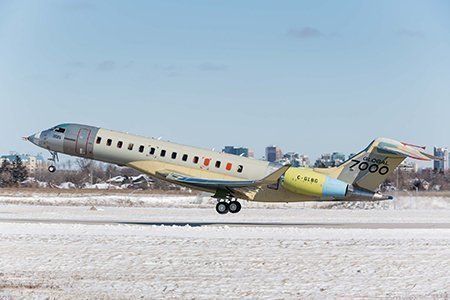 FTV 5 is the fifth and final flight test vehicle for the Bombardier Global 7000 business jet, powered by Passport engines with Nexcelle’s nacelle system.

This aircraft is called “The Masterpiece,” and will be utilized to validate tests completed to date, ensuring a smooth service entry for the Global 7000. It joins the previous four FTVs, which have logged more than 1,300 flight hours in demonstrating the business jet’s maturity and reliability.

Flight testing to date has included the Global 7000’s first international deployment, along with trials in crosswinds at high-altitude airfields and operations in all-weather conditions.

Nexcelle has a key role on the Global 7000, providing the nacelle system for Passport – business aviation’s first truly integrated propulsion system (IPS), which results from the close working relationship of the joint venture’s MRAS/Safran Nacelles partner companies with GE Aviation as the powerplant manufacturer.

Based on Nexcelle’s work-sharing arrangement, MRAS has the lead industrial role for the Passport nacelle system, and is responsible for supplying the one-piece aluminum inlet lip, the innovative anti-ice system that utilizes a directed flow nozzle concept, and the large two-piece fan cowl doors – which are produced at the company’s Middle River production site.