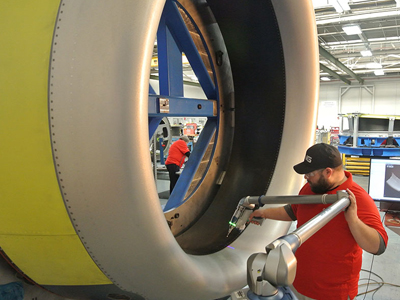 COMAC’s announcement was made this month on the company’s WeChat social media account, which included a banner featuring the jetliner and Chinese characters that congratulated the C919: “…for completing all test flights before obtaining a certificate” from the Civil Aviation Administration of China (CAAC). 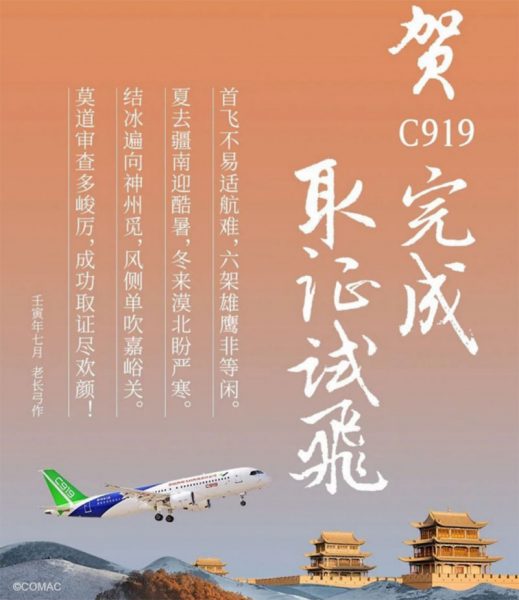 COMAC’s congratulatory banner on the completion of C919 flight testing features a photo of the twin-engine jetliner and a depiction of the Great Wall of China.

Another Nexcelle innovation on the LEAP-1C nacelle is the fan cowl – which is structurally integrated to the engine, along with an integrated mounting system for the nacelle that reduces engine distortion and enhances on-wing performance.

Additionally, the nacelle incorporates an extensive use of lightweight and state-of-the-art noise-attenuating composite materials, benefitting from the proven nacelle and thrust reverser experience of MRAS and Safran Nacelles as the two parent companies in the Nexcelle joint venture. 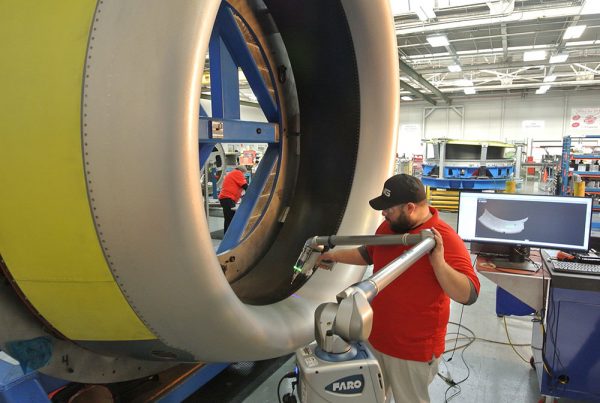 An inlet for the C919 nacelle system is inspected at Middle River Aerostructure Systems’ production facility prior to shipment.

Also included in the technological advances is the nacelle’s low-drag front end, which incorporates an air inlet with a one-piece lip skin. As the largest of its kind to enter production on a higher-thrust commercial jet engine, this air inlet improves airflow and contributes to lower noise.

Additionally, the inlet has a directed flow nozzle deicing system that more efficiently swirls engine bleed air within the inlet lip. The use of this deicing lowers the nacelle’s weight while providing increased efficiency and improved maintainability when compared to traditional nacelle deicing systems.

Based on Nexcelle’s work-sharing arrangement with its two parent companies, Middle River Aerostructure Systems is responsible for supplying the nacelle’s inlet, fan cowls, inner fixed structure and engine mounts. The C919 nacelle system’s lead industrial role is assigned to Safran Nacelles, which developed and supplies the O-Duct thrust reverser. Safran Nacelles also brings its ETRAS expertise for use in the O-Duct’s deployment.

Seven C919s have been built and flown to date

Nexcelle and its parent companies have supported the C919’s flight test program, which involved six aircraft operating from four locations across China. In May, COMAC performed the first flight of the no. 7 C919, which is the initial production jetliner to be delivered for an airline customer – the OTT Airlines regional subsidiary of China Eastern Airlines.

According to COMAC, more than 800 orders/commitments have been received for the C919.