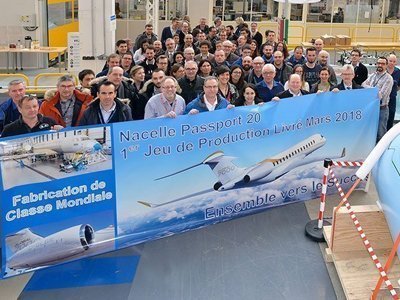 Equipped with the Nexcelle joint venture’s nacelles, the Global 7000 extends its reach

Operating a fleet of five Flight Test Vehicles (FTVs), Bombardier has demonstrated the Global 7000’s extended range capabilities for this twin-engine business jet, which is outfitted with nacelle systems from Nexcelle.

The Global 7000 business jet – which is equipped with nacelle systems from the Nexcelle joint venture of Middle River Aircraft Systems and Safran Nacelles – has become the largest and the longest-range business jet ever built, according to new performance numbers released by its manufacturer, Canada’s Bombardier.

With more than 1,800 hours of flight testing logged using a fleet of five FTVs (flight test vehicles), Bombardier reports the Global 7000 is capable of flying 300 nautical miles farther than the initial commitment. This provides a range of up to 7,700 nautical miles, connecting more city pairs than any other business aircraft – as validated by long-distance demonstration flights already accomplished to such destinations as Sydney, Dubai and Hawaii.

The nacelle is a key element of the Global 7000, coming together with GE Aviation’s Passport turbofan engine as business aviation’s first truly integrated propulsion system (IPS). This results from the close working relationship of the Nexcelle joint venture’s MRAS/Safran Nacelles partner companies with GE Aviation as the powerplant manufacturer.

As Bombardier continues on track for the initial Global 7000 handover to a customer during the second half of 2018, the two Nexcelle joint venture companies are now providing production-definition nacelle hardware to equip initial series-production business jets. This milestone was marked by celebratory events on both sides of the Atlantic: at Middle River’s Baltimore, Maryland production site in February; and at Safran Nacelles’ Le Havre manufacturing site in France’s Normandy region during March.

Deliveries of the first production-definition nacelles for Bombardier’s Global 7000 were celebrated by the Nexcelle joint venture on both sides of the Atlantic Ocean. Teams gathered to mark the moment at Middle River Aircraft Systems in February (photo below), and at Safran Nacelles in France (photo at bottom).