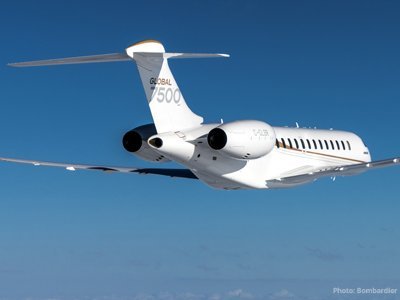 The Bombardier Global 7500 business jet has become the first aircraft certified with a nacelle system produced by the Nexcelle joint venture of Middle River Aircraft Systems and Safran Nacelles.

With the Global 7500’s awarding of its type certificate on September 28 by Transport Canada – Canada’s airworthiness authority – this twin-engine long-range aircraft is cleared for entry-into-service later this year.

Based on the Nexcelle joint venture’s work-sharing arrangement, MRAS has the lead program and industrial role for the Passport nacelle system and manufactures the large two-piece composite fan cowl doors at its Middle River production site.

The nacelle’s role in a truly integrated propulsion system

The nacelle is a key element of the Global 7500, coming together with GE Aviation’s Passport turbofan engine as business aviation’s first truly integrated propulsion system (IPS). This results from the close working relationship of the Nexcelle joint venture’s MRAS/Safran Nacelles partner companies with GE Aviation as the powerplant manufacturer.

“Certification of the Global 7500 is a milestone that underscores Middle River Aircraft Systems’ capabilities in overseeing the development and production of new-generation nacelle systems,” said Frank Dougherty, the MRAS General Manager. “It is a testament to the professionalism of MRAS employees across the full range of our activities, from design and test to manufacturing, production and quality control. It’s also a testament to our strong partnership and positive working relationship with Safran Nacelles in France.”

In announcing the Global 7500’s certification, Bombardier reported that its five flight test vehicles have accumulated more than 2,700 flight test hours in a comprehensive and rigorous testing program. In addition to the business jet’s extended flight range of 7,700 nautical miles, the Global 7500 has exceeded the takeoff and landing performance commitments – to which the Passport integrated propulsion system makes an important contribution.