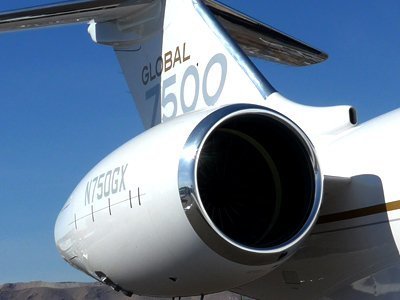 The Nexcelle joint venture’s nacelle system for the Global 7500 is in full view at Henderson Executive Airport near Las Vegas, Nevada, where the business jet was displayed during the NBAA Business Aviation Convention & Exhibition.

Bombardier’s Global 7500 – equipped with the complete nacelle system supplied by the Nexcelle joint venture of Middle River Aerostructure Systems (MRAS) and Safran Nacelles – made a high-profile appearance at last month’s NBAA Business Aviation Convention & Exhibition (NBAA-BACE), where another long-range flight achievement was announced for this high-end business jet, along with a new operator commitment.

The Global 7500’s latest non-stop trip involved a mission in excess of 8,000 nautical miles between Sydney, Australia and Detroit, Michigan – representing the longest city-pair for business aviation ever flown by a purpose-built aircraft, according to Bombardier. The point-to-point distance between these two cities is 8,225 nautical miles, eclipsing the 7,990-nautical mile distance previously flown by the Global 7500 between Singapore and Tucson, Arizona.

Since entering service nearly one year ago, the no. 1 Global 7500 aircraft has circled the world 15 times, and the in-service fleet of business jets has surpassed the cumulative 1,000-hour threshold.

Bombardier program officials attending NBAA-BACE in Las Vegas, Nevada confirmed that the company continues to ramp up production, with deliveries of 15-20 aircraft planned for this year.

Also making news during NBAA-BACE was VistaJet, which announced it will build a portfolio of Global 7500s for its members’ charter flights beginning next January, operating six aircraft by the end of 2020. Based on customer demand, VistaJet will look to take on additional aircraft in 2021 and the following years, according to Thomas Flohr, VistaJet's Founder and Chairman. 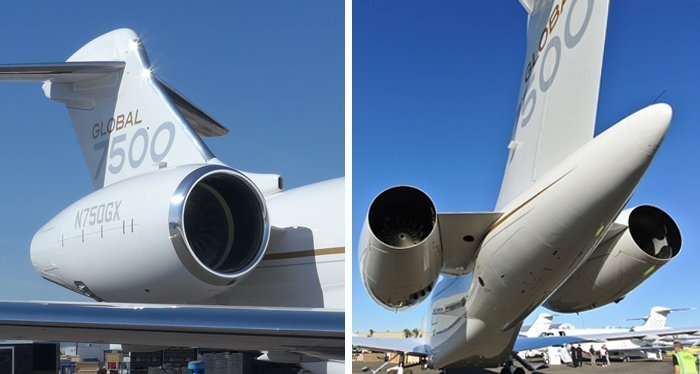 Key features of the Nexcelle nacelle are shown as integrated on the Global 7500 that participated in the 2019 NBAA Business Aviation Convention & Exhibition. The inlet and extended lip/outer barrel is visible in the photo at left, along with the long fan cowl doors. Highlighted at right are the two nacelles’ target-type thrust reversers.

Features of the nacelle include a simplified composite fan cowl that allows for improved maintenance and reduced system weight. The fan cowl – composed of upper and lower clamshell-type doors with an overall length of 103 inches – is produced primarily with composites for lower weight.