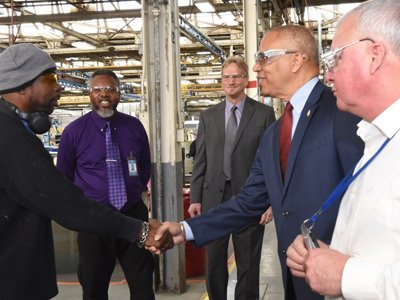 Maryland’s Lieutenant Governor Boyd Rutherford visited Middle River Aircraft Systems today, where he was given a plant tour and introduced to the company’s world-class manufacturing capabilities in jet engine thrust reversers, engine nacelle components and specialized aerostructures. It was Rutherford’s first visit to MRAS, and the first by the current Maryland executive branch. 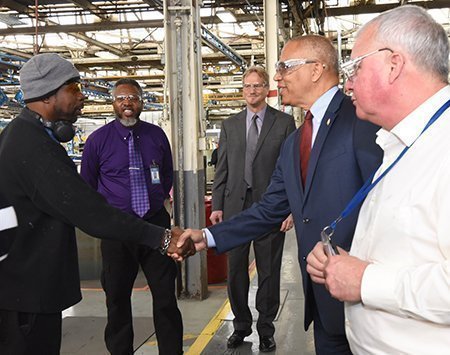 Maryland Lt. Governor Boyd Rutherford, second from right, meets with MRAS personnel during his tour of the facility. The company’s leadership team emphasized MRAS’ longstanding role in the Baltimore area as a stable employer and provider of high-tech, skilled jobs.

MRAS leadership showcased not only the facility’s longstanding capabilities, but its recent equipment acquisitions as well.

It was upon learning about the function of thrust reversers (and seeing how MRAS produces them) that Rutherford “realized he was more familiar with one of our products than he knew, given how many flights he’s been on,” said Wehmer. “The thrust reverser acts as a brake for the jet engine upon landing, and you can really hear it when it activates.”

Personnel, the heart of MRAS capabilities

More than just showcasing equipment and products to Rutherford, the MRAS leadership team emphasized the company’s longstanding role in the Baltimore area as a stable employer and provider of high-tech, skilled jobs. Rutherford met many of the 700-plus MRAS employees throughout his tour of the plant, including several first-day employees hired to work on the Airbus A320neo program, which is referred to as the fastest and largest aircraft production ramp-up in civil aviation history.

“Lieutenant Governor was impressed with all of the investments we’ve made in both equipment and personnel,” said Wehmer. “We underscored that MRAS operates in a global market, and it takes the right technology/equipment – and the right people – to be a viable competitor in the international marketplace.”