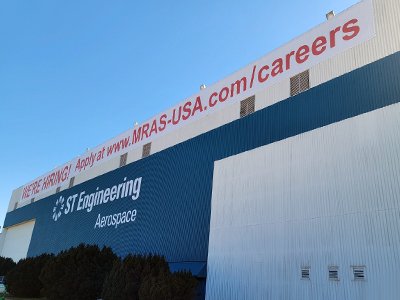 This computer-controlled robotic assembly cell – which performs highly accurate drilling, countersinking and fastener installation – is part of MRAS’ more than $100 million investment in machines and robots at its Middle River facility.

A proud aviation heritage based on more than 90 years of production continues with the manufacturing of aerostructures and engine nacelles in Maryland by Middle River Aerostructure Systems (MRAS) for customers worldwide.

MRAS – which is a subsidiary of ST Engineering – operates in the 1-million-square-foot facility at Middle River near Baltimore that was the original Glenn L. Martin Company factory, where such historic aircraft as the China Clipper, Navy flying boats, Martin airliners and military airplanes once took shape.

Today, this site hums with activity as MRAS team members produce nacelles and thrust reversers vital to the operation of jet engines on aircraft ranging from Boeing 747s and 767s, COMAC’s C919, as well as Airbus A320 and A330 jetliners, to the Global 7500 business jet and military airlifters such as the Lockheed C-5A.

In developing MRAS’ modern production resources, more than $100 million has been invested in machines and robots at the facility – particularly for the production of hardware in lightweight composite materials applied in aviation today.

With a staff of more than 800 employees – both hourly and salaried – MRAS continues to grow the business as demand for its products increases. The company currently is hiring some 140 new employees, ranging from entry-level positions to experienced machinists, mechanics, and quality inspectors, as well as professional staff for jobs in sectors that include engineering, quality and manufacturing operations.

“At a time when other aerospace companies may be closing down or scaling back their operations – including here in the Middle River area – MRAS has its sights set firmly on the future,” explained Frank Dougherty, the company’s General Manager and Senior Vice President.

In expanding the scope of business, MRAS is now developing capabilities in maintenance, repair and overhaul (MRO) sector, responding to the company’s expanded jet engine nacelle programs and its composite materials expertise.

MRAS has an FAA/EASA-approved Part 145 Repair Station Certificate that authorizes the maintenance, repair and overhaul of nacelle systems for the CFM International CFM56-7B and International Aero Engines V2500, which power two widely-used single-aisle jetliners: Boeing’s 737NG and the Airbus A320 family, respectively.

For both the CFM56-7B and V2500, MRAS’ maintenance, repair and overhaul capabilities encompass the full nacelle system: from inlet and fan cowl to the thrust reverser. As part of its MRO investment, MRAS has sets of CFM56-7B and V2500 nacelle components for exchange – enabling rapid-reaction swap-out.

MRAS’ location at Middle River positions the company at the heart of the U.S. East Coast air corridor served by large fleets of Boeing 737NGs, and strategically places it to support airlines operating significant numbers of A320s across North America.

Also included in the MRAS Repair Station Certificate’s MRO authority is the composite thrust reverser transcowl that it produces for Airbus’ A320neo family – one of the world’s best-selling single-aisle jetliner product lines.

MRAS gives high visbility to its new hiring campaign with a 263-foot-long banner that runs half the length of its historic production site in Middle River, Maryland.