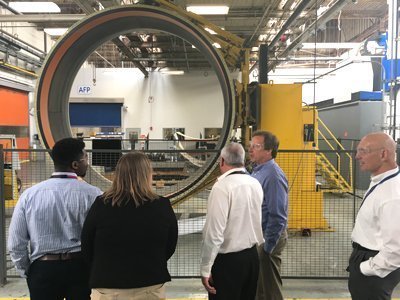 The role of Middle River Aircraft Systems in developing and producing the composite fan case for the GE9X high-bypass turbofan engine – which will power Boeing's next-generation 777X widebody jetliner – was acknowledged this month by a special visit from MRAS’ parent company, GE Aviation.

Ted Ingling, Senior Executive Product Leader for the GE9X powerplant at GE Aviation, thanked MRAS employees for their dedication and commitment during the past two years, and provided a program update before taking a tour of the Middle River industrial site.

The GE9X composite fan case includes three types of internal panels, all of which are produced at MRAS: noise-reducing acoustic panels; abraidable panels for the required tensile strength; and trench-filler panels.

An expert with composite materials

MRAS was selected for the GE9X fan case work due to its expertise with composite materials. Initially tasked with designing the internal panels and establishing procedures for their bonding, MRAS’ responsibilities were expanded during the project to include tooling design and production of the panels for development fan cases, along with assembling the fan cases into completed units.

“We started out in a support role for GE Aviation because of our experience in composites,” MRAS General Manager Frank Dougherty explained. “Our team demonstrated that we could do a lot more – taking additional responsibilities while keeping the program on schedule, as this was a critical part of the development.”

Based on MRAS’ performance, the company will at least handle the initial production run of composite panels of GE9X fan cases, as well as the cases’ build-up, with potential for more, Dougherty added.

Designed specifically for the Boeing 777X, GE Aviation’s 100,000-lb.-thrust class GE9X engine is one of the world's largest commercial aircraft powerplants, with its front fan sized at 134 inches in diameter. The initial GE9X engine flew for the first time in March, going airborne from Victorville, California on GE Aviation’s 747 flying testbed aircraft.