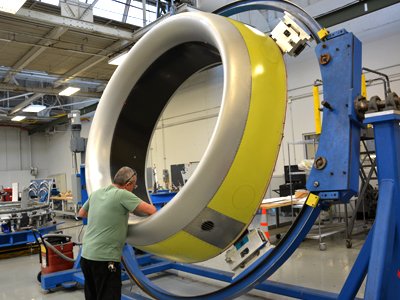 COMAC’s initial C919 jetliner that will be delivered to an airline customer performs its maiden takeoff from Shanghai’s Pudong International Airport. Photo: © CGTN.

The C919 flight milestone occurred on May 14 from Shanghai’s Pudong International Airport with the seventh C919 completed to date, which will be delivered to China Eastern Airlines for its OTT Airlines regional subsidiary. The six previously-built C919s have been used for COMAC’s flight test and certification program, operating from four locations across China – including Pudong International Airport, which is adjacent to the C919’s final assembly line.

Middle River Aerostructure Systems has a key role in the C919’s IPS through the company’s Nexcelle joint venture with Safran Nacelles. Nexcelle developed the innovative nacelle system for the IPS – which provides operational improvements that include lower fuel consumption, reduced noise levels and facilitated maintenance.

The C919 is powered by two LEAP-1C turbofan engines produced by CFM International. To create the highly integrated propulsion system for the jetliner, CFM International has worked closely with Nexcelle and its parent companies, beginning with the IPS’ development and continuing through its production.

The Nexcelle joint venture also has provided continued support during the C919’s flight test and certification phase through its MRAS and Safran Nacelle parent companies, with preparations now underway to support the COMAC twin-engine airliner when it enters commercial service.

Nexcelle produces the nacelle, the thrust reverser, and exhaust system for the integrated propulsion system, while CFM International (a 50/50 joint company between GE and Safran Aircraft Engines) builds the LEAP-1C engine.  This powerplant, with a fan diameter of 77 inches, delivers a maximum takeoff thrust of 31,000 pounds.

Other Nexcelle innovations on the LEAP-1C nacelle are the fan cowl – which is structurally integrated to the engine, along with an integrated mounting system for the nacelle that reduces engine distortion and enhances on-wing performance. 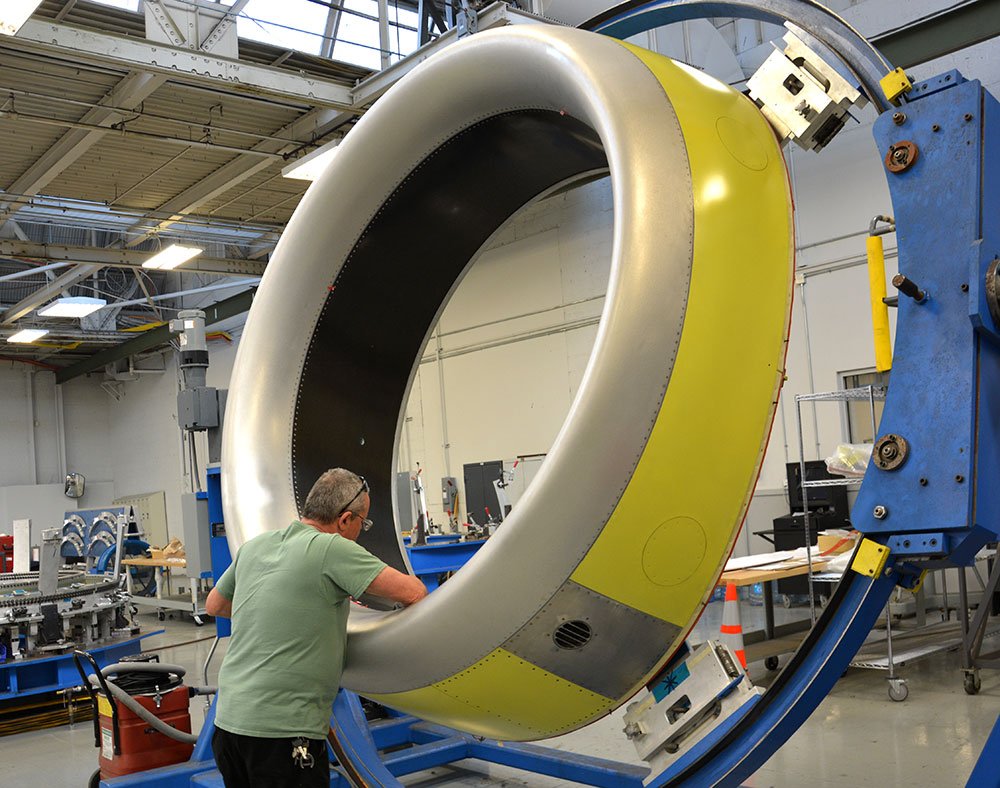 An air inlet for the C919’s integrated propulsion system is prepared at the MRAS production facility in Middle River, Maryland. The inlet’s features include a one-piece lip skin.

The nacelle also incorporates the extensive use of lightweight and state-of-the-art noise-attenuating composite materials, benefitting from the Nexcelle joint venture parent companies’ proven experience in their respective nacelle and thrust reverser product lines.

Also included in the nacelle system’s technological advances is its low-drag front end that incorporates an air inlet with a one-piece lip skin – the largest of its kind to enter production on a higher-thrust commercial jet engine, improving airflow and contributing to lower noise.

The workshare for MRAS and Safran Nacelles

Based on Nexcelle’s work-sharing arrangement with its two parent companies, Safran Nacelles has the C919 nacelle system’s lead industrial role and supplies the O-Duct thrust reverser. Safran Nacelles also brings its ETRAS expertise for use in the O-Duct’s deployment.