Global 8000 business jets will be equipped with Nexcelle’s nacelle as part of the Passport integrated propulsion system (IPS). This marks the second application of the Passport IPS, which currently powers the Global 7500 version.

The Nexcelle engine nacelle that currently equips Bombardier’s Global 7500 will also be utilized on the latest version of this large cabin, long range business jet: the Global 8000.

This marks the second application for the nacelle, developed in the Nexcelle joint venture of Middle River Aerostructure Systems (MRAS) and Safran Nacelles.  It is a key element of the Passport integrated propulsion system (IPS) on the Global 7500 twin-engine jet, of which more than 100 have been delivered to date, as well as for the newly-unveiled Global 8000 – with a service entry planned for 2025.

The IPS results from a close cooperation of GE Aviation, manufacturer of the 18,000-pound-thrust-class Passport turbofan engine, with Nexcelle as supplier of the nacelle system and thrust reverser. 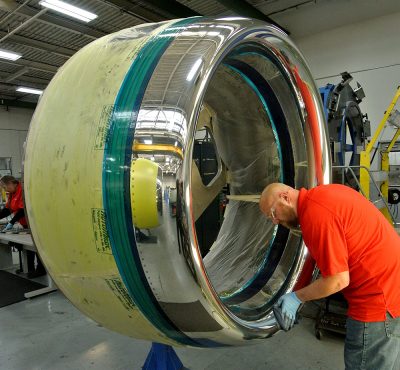 Composite materials also are used to produce a simplified fan cowl, with its large upper and lower fan cowl doors (103 inches in length) facilitating access to the Passport engine for inspection and maintenance.

A mature target-type design is used for Safran Nacelles’ thrust reverser, benefitting from lighter weight through the integration of components that typically are separate, such as the pivot frame and fan ramp. The use of composite and thermoplastic materials also contributes to the thrust reverser’s lower weight. During flight, the thrust reverser has very low internal drag when stowed in its direct-flow configuration.

A supersonic flight test in preparation for the Global 8000

A key feature of the newly-unveiled Global 8000 version will be a top speed that is just under supersonic. To validate this capability, Bombardier flew one of its Global 7500 development aircraft faster than the speed of sound, repeatedly attaining speeds in excess of Mach 1.015. 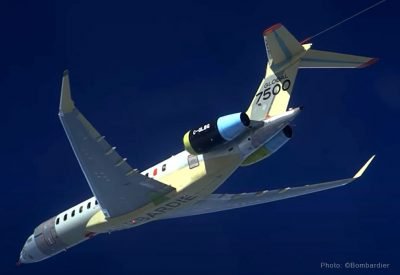 This underside view of the Global 7500 during its supersonic flight tests highlights the business jet’s Passport integrated propulsion system (IPS) with Nexcelle’s nacelle. The unpainted nacelle clearly shows its primary sections: the air inlet (in green), the 103-inch fan cowl doors (black), and the aft section with its thrust reversers (light blue).

The demonstration flight, performed with the fifth Global 7500 development aircraft, enables Bombardier to set the Global 8000’s maximum Mach operating speed (MMO) at Mach 0.94, making it the world’s fastest business jet – and the fastest in civil aviation since the Concorde supersonic airliner.

Additionally, the Global 8000’s capability to fly 8,000 nautical miles non-stop will position it as a leader in long-range flights: an important attribute for operators of high-end business jets.

Even with this enhanced speed and range, the Global 8000 will retain the capabilities already proven in service by the Global 7500, including operations from shorter runways and high-altitude airfields. These capabilities are attributed in part to the performance delivered by the Passport IPS, benefitting from the integrated propulsion system’s reduced overall drag, along with the effectiveness of its thrust reversers during landing deceleration and braking.

The Global 8000’s performance enhancements will be retrofittable to Global 7500s when the new version enters service in 2025, according to Bombardier.