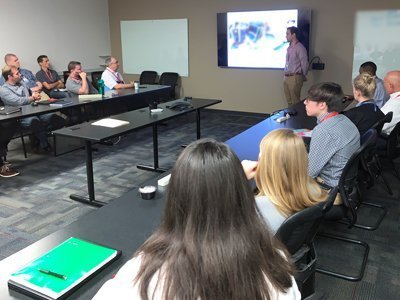 For the first time since Middle River Aerostructure Systems was acquired by ST Engineering, the company welcomed a group of interns during the summer – enabling them to gain direct experience when working alongside employees. Fourteen local college and university students with a passion for aviation engaged in a variety of projects, developing their skills while learning more about the aerospace sector.

The majority of this summer’s group is studying aerospace engineering and mechanical engineering, and they used the hands-on opportunity to grow as future professionals.

“This particular group of interns was outstanding,” explained Alex Tinsley, Talent Acquisition Manager at MRAS. “The feedback about their work ethic and what they’ve brought to the table was positive throughout their time here; they really exceeded the expectations we had for them. Many of the supervisors even wanted to keep them on board beyond the summer internship program.”

Unlike a typical internship – much of which can involve “busywork” – the MRAS summer program empowers students to provide their fresh perspective in updating, streamlining  and enhancing operations at the company.

“We want to make sure this program is going to be memorable and impactful for their career,” Tinsley said. “This helps us create a win-win situation: it’s a win for us, as we have someone come in with a potentially new perspective; and it’s a win for the students, who do meaningful work during their summer break and receive the type of experience they are unlikely to find elsewhere.”

This summer’s interns were assigned to a full range of activities across the plant’s daily operations, using their classroom training to propose potential changes and revisions to the actual workflow, processes and procedures at MRAS. Examples of the interns’ projects included operational improvements for a robot used in spray painting of completed parts for jet engine nacelles, enhancements to the traceability of parts by utilizing a web-based application, and enhancing computer code applied in the functionality of a nacelle.

The different types of work interns do at Middle River Aerostructure Systems have a direct impact on the company’s day-to-day operations, enhancing cost effectiveness and improvement in practices.

Middle River Aerostructure Systems continues to expand its connections to colleges and universities in the Baltimore area and surrounding regions. A majority of this summer’s interns are studying at the University of Maryland, College Park – which enjoys a positive relationship with MRAS. The company frequently attends on-campus career fairs, and has built lasting relationships with interns – some who have become full-time employees.

MRAS has plans to expand its relationships with other colleges in the area and attract more outstanding candidates to intern and work at the plant.