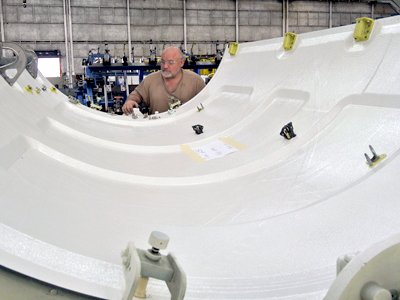 One of the composite fan cowl doors for Bombardier’s Global 7500 is inspected at MRAS prior to its shipment for integration on the business jet’s GE Passport engine.

The contributions of Middle River Aerostructure Systems’ “smarter” engine nacelles in lowering the environmental footprint of airliners and business jets has been highlighted in a story posted by Aviation Week Network – one of the aerospace industry’s most respected news organizations.

Published as part of Aviation Week Network’s MRO Digest, the article explains that MRAS increasingly collaborates with engine manufacturers to develop integrated propulsion systems that result in less fuel burn, better aerodynamics and lower noise. This was outlined in the wider context of how MRAS’ parent company, ST Engineering, is focusing on sustainability for aviation through steps at its aviation businesses.

Among the MRAS programs cited in Aviation Week Network’s story are nacelles for the GE Passport engine – utilized on Bombardier’s Global 7500 business jet, and for CFM International’s LEAP-1C, which equips the COMAC C919 jetliner.

With the Passport nacelle, MRAS achieved lower weight primarily with the extensive use of composites, including in the large two-piece fan cowl doors that enable access to the engine for inspection and maintenance. On the larger LEAP-1C engine, reduced noise levels are achieved with air inlets fabricated in a proprietary process, assembling honeycomb core for acoustic liners with acoustically “transparent” splices. Both the Passport and LEAP-1C nacelles are developed and produced through the Nexcelle joint venture of Middle River Aerostructure Systems and France’s Safran Nacelles.