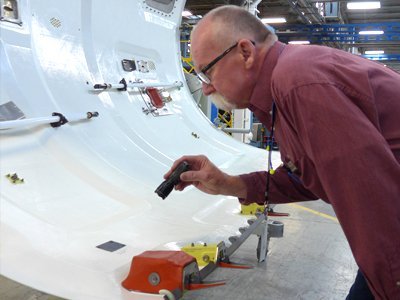 Bombardier delivered its initial Global 7500 in December, following a flight test program that was supported by Nexcelle and its parent companies. Certification of the twin-engine aircraft by the European Aviation Safety Agency (EASA) was announced by Bombardier earlier this month, which followed approval by airworthiness authorities of the U.S. (Federal Aviation Administration) in November 2018, and Canada (Transport Canada) in September 2018.

A pioneering IPS for business aviation

Nexcelle’s nacelle is a key element of the Global 7500, contributing to the performance of this aircraft – which is the industry’s largest and longest-range business jet. In addition to its non-stop flight capabilities, the Global 7500 has exceeded takeoff and landing performance commitments – which is due in part to the integrated propulsion system (IPS), consisting of Nexcelle’s nacelle and the Passport turbofan engine.

A fan cowl door for the Global 7500 business jet’s integrated propulsion system is inspected prior to shipment from MRAS’ production facility.

The close working relationship between Nexcelle as nacelle provider and GE Aviation as Passport’s manufacturer resulted in a highly-efficient and effective integrated propulsion system – the first true IPS for business aviation.

One key feature of the Nexcelle nacelle system are its simplified upper and lower fan cowl doors. With a length of 103 inches, the doors facilitate access to the Passport engine for inspection and maintenance, and the use of composite materials in their production results in reduced system weight.