Powered by the CFM International LEAP-1C integrated propulsion system with Nexcelle’s nacelle, the no. 3 COMAC C919 prototype takes off from Shanghai Pudong Airport on its maiden flight.

The COMAC C919 jetliner – which is equipped with an innovative nacelle system from the Nexcelle joint venture of Middle River Aircraft Systems (MRAS) and Safran Nacelles – has entered a new phase of its flight test and certification program, with three prototype aircraft now participating in the evaluations.

The latest C919 prototype performed its maiden takeoff in December from Shanghai, joining the no. 2 aircraft (flying since December 2017) and the first prototype (in flight testing since May 2017).

To support these activities, the focus of flight activity has expanded from Shanghai – home of the COMAC (Commercial Aircraft Corporation of China, Ltd.) C919 final assembly line – to the Chinese cities of Yanliang and Dongying, where air traffic is less dense. 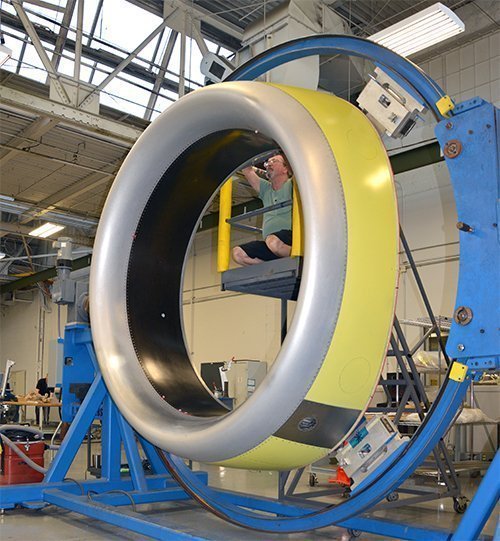 An air inlet for the C919 jetliner’s nacelle is inspected prior to shipment from MRAS’ headquarters site at Middle River.

Improved engine maintenance is another advantage of the O-Duct design, resulting from easier access to the LEAP-1C’s engine core and the thrust reverser components.

Additionally, the C919 nacelle system features the replacement of heavier hydraulics by an electrical thrust reverser actuation system (ETRAS), which drives the O-Duct aftward to its reverse thrust position.

As part of the Nexcelle work assignment for the joint venture’s parent companies, MRAS designed and supplies the single-piece aluminum inlet lip – the largest of its kind to enter production on a large commercial jet engine. It contributes to the nacelle’s low-drag front end, improving airflow and lowering noise levels.